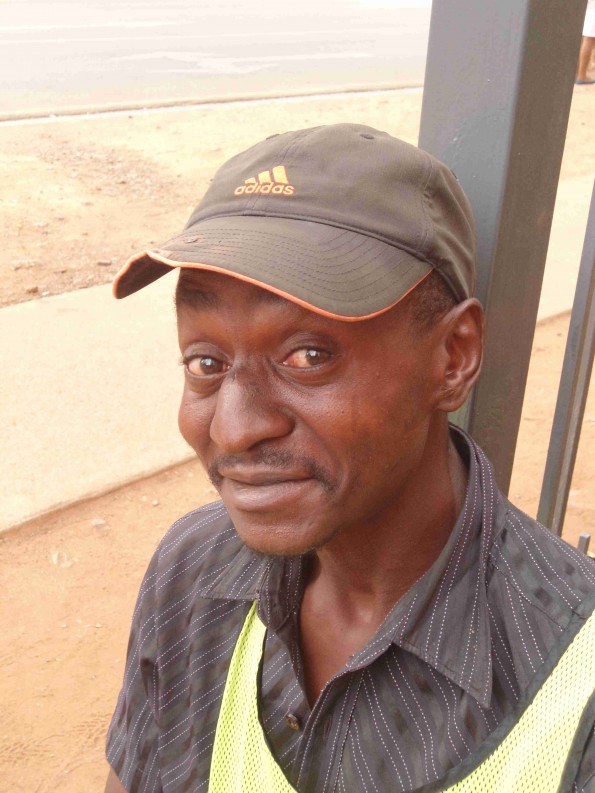 Chris is always there, walking around to help people park in or drive back to the road. with a vocabulary of hand signs, pretty much like an aircraft marshaller. Or he is sitting in his red plastic chair. Just in front of the campus. That’s where Chris guards cars. I’d call that car-sitting. Car-sitting is a very common job here in South Africa.

Chris always greets people. Even those without a car, like me. He always has a nice word, at least a smiling “how are you?”. He was one of the few people who asked me how things were in my country, after what happened in Paris. Chris is from Ermelo in Mpumalanga. This year will be his third here in Pretoria, far from family. He hasn’t got much news because they changed their number back home, two months ago. Now he’s afraid he won’t have the money to travel there for Christmas. A little while ago, he did some painting work on a construction site, for which he had been promised some ZAR 1,000 (South African rands). But those people who were supposed to pay him just… vanished.

When I ask him to draw something, he patiently sets himself on tracing those multiple curves, going through the same lines again and again. “Am I not wasting your time?” “No, not at all. Man, it looks like you love drawing.” “Yes, I do. But it’s been a long time you see.”. I watch the drawing taking shape. “What are you doing there Chris?”.

0 comments on “Chris’s broken heart”Add yours →